I have to laugh at a couple city-dwelling friends who found out that, with traffic reduced, they can hear NATURE. Usually it’s birdsong, which can be very loud before dawn and at dusk. (I sympathize with the folks near the Detroit Zoo who hear peacocks! Oh, they’re loud and they sound like a child yelling for help. Who wants to wake up to that?)

Because of shifting animal demographics, people living in less-populated areas can be startled by new sounds. An acquaintance discovered that foxes’ calls during the mating season sound like someone is being murdered by a yappy dog. He described it as “SCREEEEAAAAMMMM. Woof-woof. SHREEEIIIIK. Yodel. Woof-woof.”

An early-rising jogger friend-of-a-friend heard a deer screech: “Freaked me right the F out the first time I heard it.” I think he lives in a region with small red deer. Whitetail make a kind of grunting noise that is distinctive but not stress-inducing.

A few days ago, one of the Middle School Mafia decided to incite a disturbance by howling in the backyard. All the dogs in the neighborhood joined in and couldn’t be quieted for a good thirty minutes. Everyone had a laugh except the nightshift neighbors.

As the lockdown lifts, I hope people keep an interest in the sounds of nature.

First, a bang! Then the culprit ran away…

… and slipped through the chainlink fence. Shortly thereafter, the Accessory After the Fact showed up to abscond with the evidence. 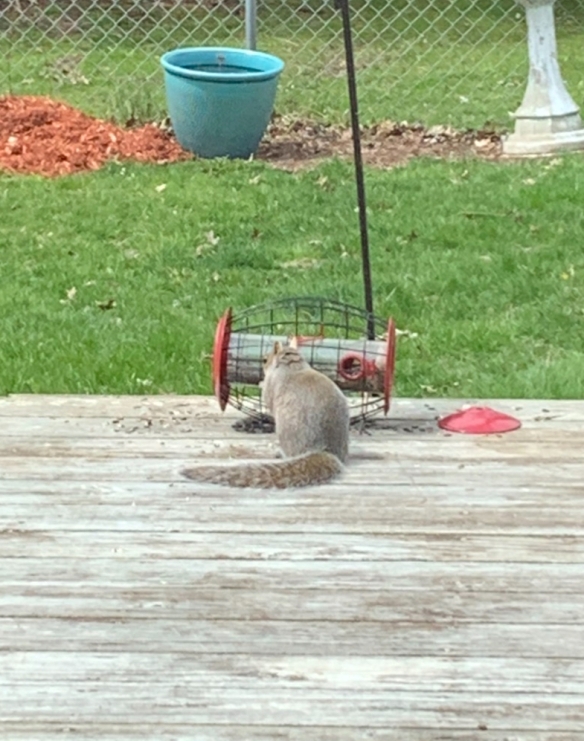 Michigan’s official motto is Si quaeris peninsulam amoenam, circumspice (If you seek a pleasant peninsula, look around you). The state, composed of two peninsulas that jut into Great Lakes, has truly beautiful areas around every corner.*

However, the unofficial motto is “If you don’t like the weather in Michigan, wait five minutes.” The photos reflect the hazy coolness,  sunshine… and wind and snow that occurred over just 14 hours in my hometown, where I checked on my aged parents.**

* Its smallest state park is the 22-acre “pocket” around Wagner Falls.

**My official excuse in case I was pulled over while driving to see them last week, when Governor Whitmer tightened her shelter-in-place order.  I wasn’t. Nor were the many out-of-state drivers pulling boats to their cabins.

This mutant robin has territory on a main drag in the nearby town. Because the roads are mostly traffic-free, I managed to snap its picture after several attempts. Its condition is leucism, a lack of pigment in feathers.

North American robins – aka Turdus migratorius aka Wandering pooper* – have returned en masse to Michigan.  They boldly hop across the deck while I’m lunching, They investigate the sod I’ve overturned – while I’m in the middle of planting hostas. They scold me as I refill the birdbath.

Of course, they make up for it by being harbingers of warmer weather. They also sing, “chuckle” and chirp: three sounds for the price of one!

They will, no doubt, return to their milder manners after they’ve finished fighting each other over territory and started building nests.

Or I am doomed to be bossed around by birdbrains!

*Not the real translation of the Latin scientific name, although it CERTAINLY is “in the vulgar.” 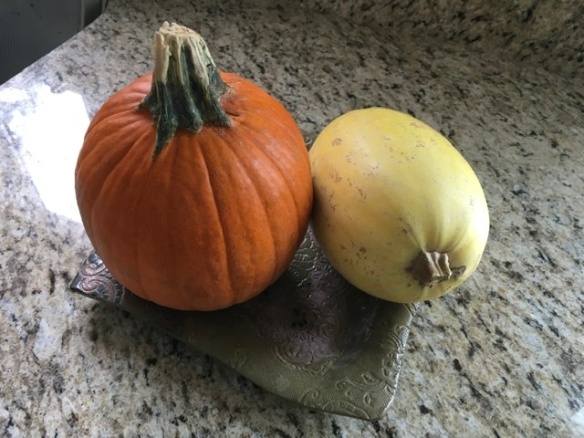 I don’t decorate for Thanksgiving* but I add a few autumnal touches close to Halloween. My friend Sissy gave me a silly squirrel tea towel last year, joined this year by her hand-made matching pillowcase for a travel-pillow. My favorite decoration is a bowl or two of squashes and small pumpkins from local farmers.**

Then I cook and eat them.

Last week I enjoyed butternut and acorn squashes. This week it was delicata, which I’d never had before. Verdict: very pretty and delicious. All that remains are a pumpkin and a spaghetti squash.

I highly recommend decorating with regional edibles. It’s a twofer: Nothing goes to waste and it supports local growers.

*Halloween decorations consist of a felt skeleton for the door and a fancy candy bowl for the trick-or-treaters.

Earlier this month, I returned to my hometown. Besides visiting my parents and a dear friend, I went walking along the roads that seemed so very long when I was a child.

Some things hadn’t changed, such as cattails and Queen Anne’s Lace growing in the ditches. The cloud banks were still as bright in the wide open sky. The redwinged blackbirds trilled harshly in the cedars.

Cattails on the edge of a hayfield.

But more than one field was being taken over by young trees or sumac. The old small farmers aren’t being replaced, and there are far fewer heads of cattle or horses. There’s still beauty there, but all the familiar landmarks are falling to Time.

The beginnings of a softwood forest invade a neglected field. 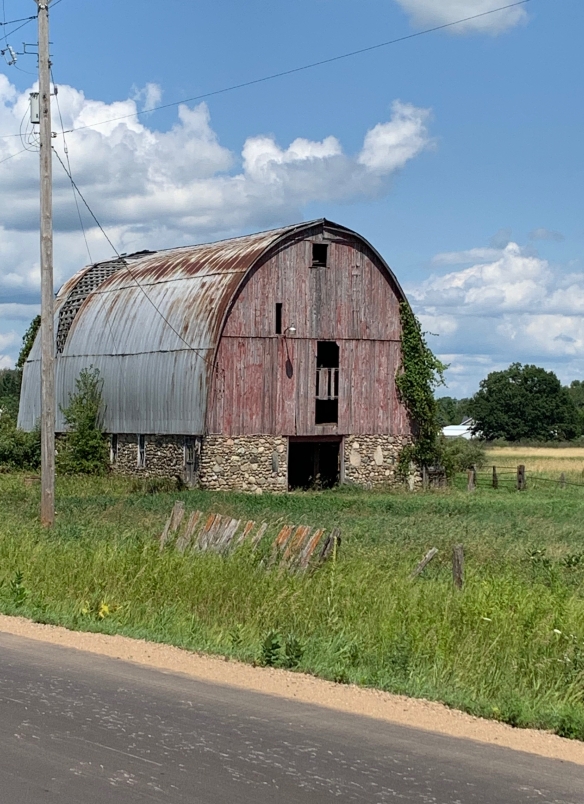 As a little girl, I looked forward to watching the calves frolicking near this barn. They always looked so NEW because their white patches were so bright.