Yesterday was Junk Day, a yearly event in which the township Department of Public Works (DPW) collects everything residents wish to toss, from spare tires to chunks of concrete. It coincided with the DPW’s electronics drop-off, for which I’ve been saving all the children’s broken earbuds.

For this special occasion, I tackled the shed . I started with the Known  (hoses from the old washer), moved to the Unknown (the rusty canister that seemed to be corroding from within), and then to the Mysterious (the Lumber Pile).

The pile started as a stack of thick planks covered on one side with blue enamel paint. They came with the shed. Heck, they may have been part of the original purchase agreement! They look like they’d make good shelves, but there are no shelves anywhere like them in the house or the shed.   END_OF_DOCUMENT_TOKEN_TO_BE_REPLACED

“I had to save the earthworms.”

On Tuesday night heavy rain came down, so when I went outside to get an early start to work, there were twigs everywhere on the driveway – some as long as my hand, some smaller than my pinkie.  I couldn’t imagine where they’d come from, since they were all straight and had no branching…

When I realized they were earthworms, I was amazed. So many of them!

Honestly, I thought of going into the house to get a camera (my phone doesn’t have a good close-up feature). Then I thought, Who would want to see this?

I got a broom from the shed and swept them aside – they most obligingly curled up to they rolled away.  Unfortunately I missed about three and squished them under the tires. Poor creatures.

I thought it strange that no robins came down for the feast, but the weirdest thing was that there was no sign of them in the road or on either of my neighbors’ driveways.  I wonder if it’s because I don’t use chemicals on the garden or front lawn.

It seemed like I dug up more worms than usual when I planted the rhubarb last weekend.  I’m a little leery of attracting their unpleasant predators, skunks, huge centipedes, and slugs. However, if extra earthworms means better aeration and natural fertilizer, then thank God for it!

“Why Are Earthworms Good for Gardens?” on Wonderopolis (which also contains a video about switching from commercial products to a worm composting system, although it left me… wondering!)

After my last post crowing about the recent technological advances in The House of Nonsense, a storm blew in.  It was a system that tore a swath of destruction across several states and provinces. The worst struck here Saturday, shortly after I arrived home from two days of celebration (a college graduation and meeting a new sobrino).

First came the wind, then thunder, and finally buckets of hail that slammed against the chimney and the deck. It was so loud that I didn’t hear the crashing trees not far down the road.

Then the electricity went out. END_OF_DOCUMENT_TOKEN_TO_BE_REPLACED

That was (relatively) painless.** I now have superior Wi-Fi service in the house.

That means faster and more reliable nonsense will be flowing from La Casa de Tontería.

That means there’s no longer a blinking modem perched like a red-eyed vulture on a teetering pile of books.

It means that the original owner/builder – politely known as “Jerkface McGuyver” – threw another lemon my way, but I made lemon cake. (Want to refresh yourself on Mr. McGuyver’s nonsensical design? Start  here.)  END_OF_DOCUMENT_TOKEN_TO_BE_REPLACED

My friend Katie has a saying that her father used, “Your car sits at the dinner table.” Meaning: When you’re on a budget, your automobile is right there, taking the food from your mouth.

My friend M’e the Fashionista has a saying: “Don’t let the car hear!” Although always on the latest fashion (and foodie) trend, M’e and her husband would rather have older models of cars than pounce on the latest model.  She’s noticed that when they’ve gone on vacations, done remodeling and other big-money expenditures, car troubles soon hit their pocket book. The car wants its cut of the pie. (Which would also make a great saying!)

The stove found out and is dying of jealousy. END_OF_DOCUMENT_TOKEN_TO_BE_REPLACED

I’m only a few weeks into an online class and already it’s as time-consuming as I’d feared. Each module (aka a unit of study) includes a time estimate for completion. As advertisers say, “Individual results may vary – whoa, howdy!”

The Introduction takes an estimated 5 hours. My time: 7.5

On the first real unit, I copied my answers from a course I took two years ago and posted it anew. I went over the estimate by only an hour. (No, I’m not happy that two years later, a new class with new instructors features the same questions in the same order.)

This week’s Module is a laugh: Time Management. I’m actually over an hour under the estimate this time, and I think I’ll be done a few days early. I plan my time fairly carefully because I have so many deadlines.

I enjoy my job, but sometimes Work is like a clever little monster that slooowly devours one’s hobbies and social relationships, so slowly that you scarcely notice what he’s swallowed until you spend time away from him. Then you see how empty your life is without him.

So I planned this coming week, sketching out the necessities and filling the gaps with things I want to do. With the snow squalls discouraging trips between friends and the agéd parents traveling in warmer climes, I have a little more free time (and yes, I’d trade free time for socializing!).  So it looks like Ye Olde Wallpaper is set to come down this coming week.

Or a SCREWPULL as the case may be. Mine is very simple and works nicely on both wine bottles and the bottom-heavy bottles of cerise (a sort of cherry cordial) that one of my brothers buys for me on special occasions. 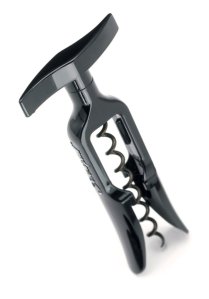 My family takes their wine seriously (some of my vast relations are, or work for, vintners). However, they’ve shown me that all the fancy gadgets like electric pulls and super-suction pumps aren’t that much better than this. In fact, I have broken two rather fancy corkscrews with my inhuman strength (or sheer klutziness!)

Julie at Happy Catholic* has a tip for opening wine bottles without a corkscrew.

I joked that for emergencies, “I prefer to open it by slamming it against the table, pouring it from the broken bottle, and then growling, “Gonna cut you!” at the other guests. Bonus if it’s a wedding reception.”

One of my friends saw my most recent post and asked, “Hey, do you want a TV?”  No, thanks. I already have two.

Not long after I moved into this House of Nonsense (not to be confused with This House of Brede), I decided to update the guest room which was originally a child’s room – complete with crayon on the wall. Dad painted, Mom and I applied a tasteful wallpaper for the wainscoting, and then we moved the furniture back in.

Did I mention I’m a klutz? Well, I am. And in the House of Nonsense (aka La Casa de Tontería), I achieve optimum klutziness.

The TV stand was solid and heavy – so heavy we had to use “sliders” underneath.  When we pushed/dragged it across the floor, a leg caught on the carpet. Then the side broke off and created a cascade failure (in other words, much hilarity ensued). I couldn’t figure out where to put the heavy TV, so I made a gift of it to my parents, whose own ancient set had blown a tube. (Yes, a TV with a tube.) END_OF_DOCUMENT_TOKEN_TO_BE_REPLACED

I like to read about interior design, sometimes in traditional magazines but often through websites like ApartmentTherapy or BHG (aka Better Homes & Gardens).  Small-space and eco-friendly living has definitely hit the mainstream, so it’s not unusual for photos to feature micro apartments and edible gardens.

But often “small space solutions” really means “how to cram more stuff into a tighter space.” My pet peeve lately has been commenters who vent their spleens over Americans** building huge houses to hold all their mass-produced goods, then proceed to  recommend Ikea’s mass-produced goods for storage.

Below are some of my self-imposed rules about décor:

Don’t have enough space? First weed out and pare down.

Feel everything is dated? Concentrate on what truly needs replacement; e.g. worn-out flooring or broken blinds. Trends come and go, but a practical upgrade has longevity.

**NOTE: Even if the poster acknowledges that consumerism is a problem in other countries, it’s always viewed as a disease spread intentionally by Americans.  Additionally, the majority of American builders were building “right-sized” homes with green options and fewer luxuries in 2009.

It’s taken almost a week for my fingers to feel normal enough to blog. I’ve been removing wallpaper. I tried scoring it, using special environment-friendly remover, and sponging it, but nothing works as well as slapping wet towels on it, holding it a while, and then using my fingernails to pull it off.