For almost three years, a black cat has been frequenting the neighbor’s property. At first I believed it belonged to him, but then I realized it and a battle-scarred tabby hunted vermin attracted by his squalor.

This spring, Black Kitty decided my back garden is the best place to spend mornings. It particularly likes the deck and the space between rhubarb and birdbath. 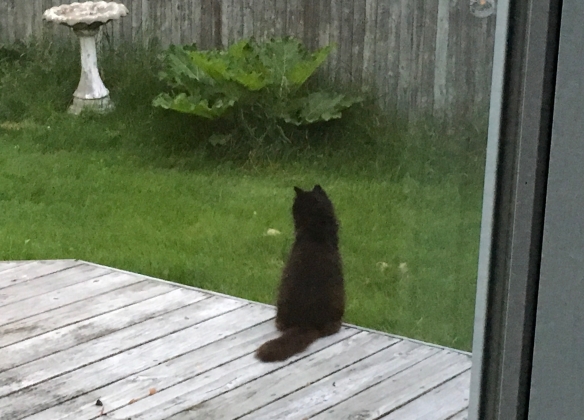 Black Kitty surveys the garden a little after five in the morning.

Kitty-spotting has become something of a morning ritual.  Its reaction is predictable and funny. The click of a door unlocking will perk its ears and set its eyes to “alert mode,” but it invariably never takes the shortest escape route.

It could easily hop the fence or slink into the shrubbery. Instead, it exits via the driveway.  This has meant passing by me, eyes wide with alarm, and looking back to see if I am chasing it.

Shed sentinel disappointed in the state of the lawn.

Black Kitty even stopped under the overgrown trees near my car and stared silently as I passed within inches of it. No, I have not attempted to touch the silly thing, just talked and meowed at it.  I don’t want a pet when a feline neighbor will do.

5 thoughts on “Black Kitty The Neighbor-Cat”