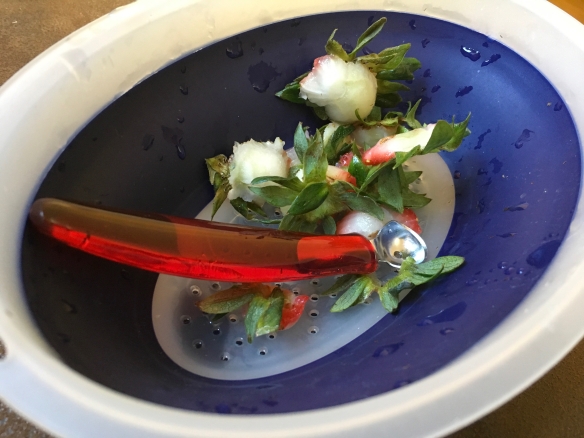 A strawberry scoop, erm, huller in the collapsible berry colander (with removable cap under the drainage holes).

There’s a cliché about girls going shopping and impulsively buying too-glamorous clothes. My friends are different; they convince me to buy kitchen gadgets.

Some of these have been delightful. (See above.) Others ended up breaking or being given away unused. Then there are those with a learning curve…

A couple days ago, I decided to make a simple salsa in the handy-dandy food processor that is just like the one my friend Tone bought her brother.* I almost never use it except to make coleslaw or cauliflower mash.

I put the beans, tomatoes, and spices through first. Then I thought I’d pulse the chicken and corn just enough to blend it in.

Evidently blenders have a “pulse” setting, but food processors have “destroy” and “liquify” settings. In seconds – double the length of time it took to realize that everything was becoming one – I had a strange brown liquid with hints of other colors. (Rather like a rug I used to play on when I was a child.)

It tastes delicious. Instead of going on the tortilla, the tortilla became a bread side to a soup.

* Because. That’s why. Oh, who am I kidding? It was peer pressure! I am a sheeplike shopper!